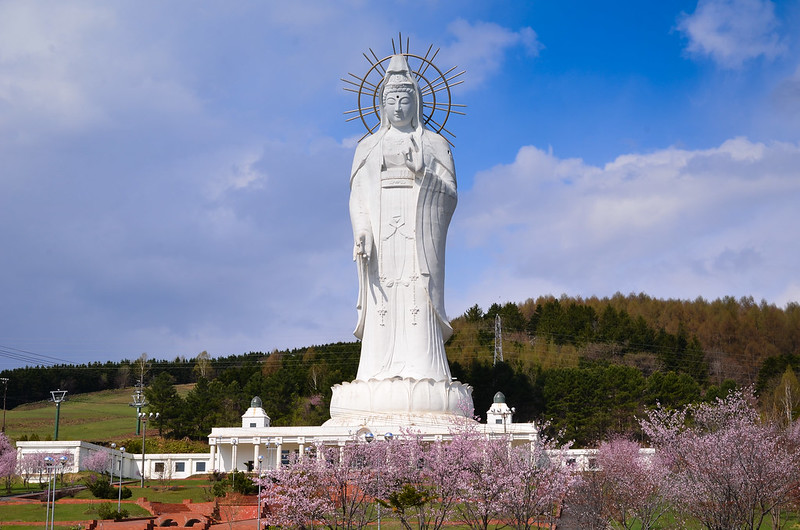 In Japan, big statues are no big deal. There’s the Daibutsu at Nara, of course, but I’ve stumbled across other monumental, well, monuments in several other towns. But then, rolling through the countryside on a local train somewhere between Takikawa and Furano, I spotted a giant white figure on the horizon.

The Dai-Kannon at Ashibetsu towers over the town – in fact, it’s the tenth tallest statue in the world. And there’s precious little English-language information about it – so I had to take a look. Here’s what I found when I visited, and what I’ve since found out about it.

If the Kannon statue was in my car’s GPS, I couldn’t find it – but I figured that if I drove to Ashibetsu, it’d be signed – or, failing that, I could hardly miss it. Following the main road into town it was obvious that I should take a right across a suspension bridge, and on the other side I found what I thought was an oddly placed temple pagoda – it’s actually fake, and part of a hotel – and then a car park entrance.

The car park is for the hotel. One U-turn later I followed an abandoned looking road that appeared to head towards the statue – and emerged in a large, deserted car park. 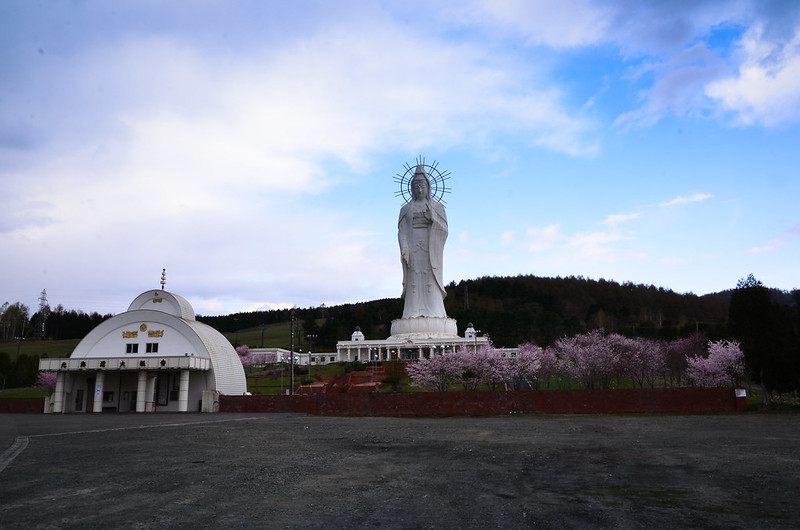 The photo above was taken as I left, with a big storm brewing and clouds shadowing the ground – but even in sunlight, it was a slightly unnerving scene. I dumped the car in the middle of the empty space, and walked up. The entrance shown on the left is long since abandoned – dusty, empty ticket booths, and no turnstiles, so I went on in.

You emerge at the bottom of a huge, and obviously rather ornate garden, with lots of fountains. All of which are dry. 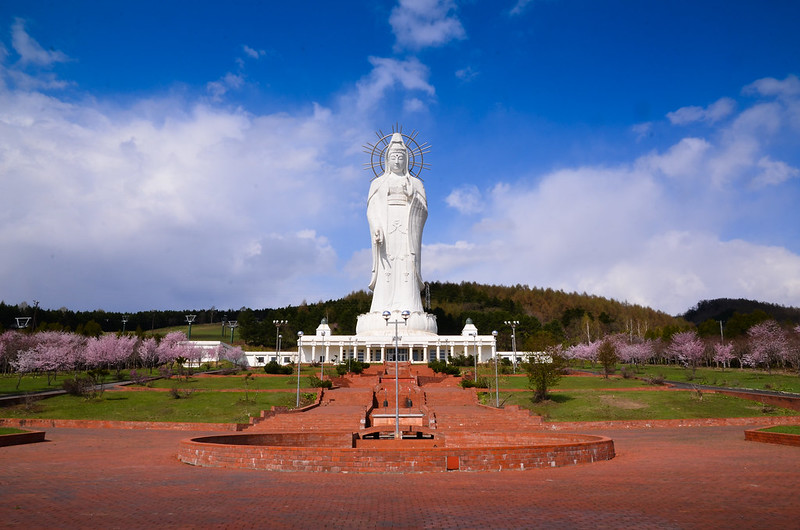 Sunlight again, as I took this on the way in. At this point, I was tempted to turn and leave – the place was obviously abandoned, with nobody in sight. But having driven for an hour, I figured I’d at least take a look up close. And, about half way up, success – a family of three appeared at the entrance, struck a bell, and then drove away in the car that they’d parked off to the right of the statue.

Inside, a man behind the door looked rather surprised to see me – but was happy to let me in. There’s a fee of, if I remember correctly, 500 yen.

“There’s an elevator”, he said.

And indeed, from the rather large, and rather worn, entrance hall a small escalator takes you to the gaudiest set of lifts you’ve ever seen. 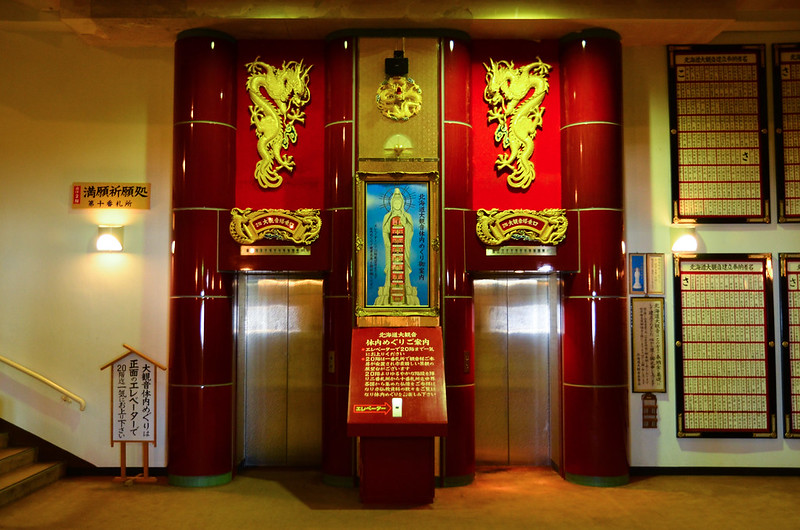 There are 20 floors, and the lift stops at every second one – but, not keen to get stuck if it were to break down, I went straight for the top. On the 20th floor you exit into a really rather large shrine, decked out mostly in gold, but signs usher you to the right, where you emerge onto a balcony just above Kannon’s belt, and right next to a massive hand: 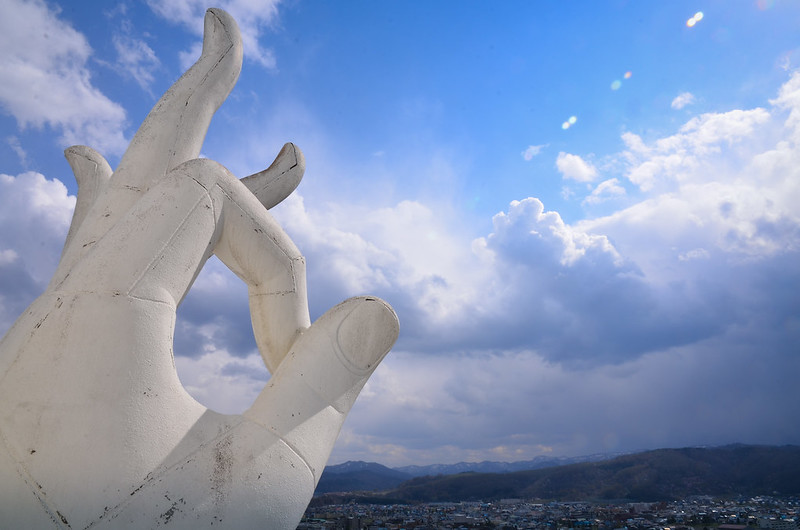 Even if you have no interest in random giant statues, it’s well worth visiting for the view – it’s really impressive. 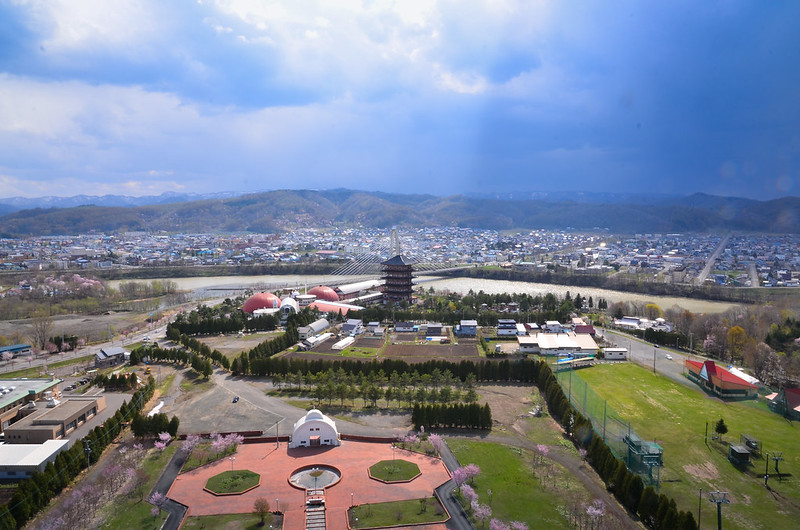 And there’s my car, all alone.

Back inside, I took the stairs down a few floors – to find that the shrines run all the way up and down the building: 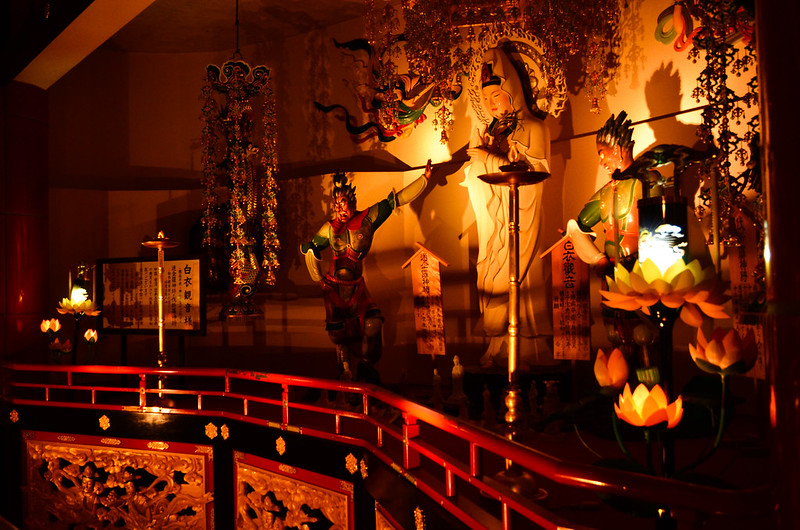 ..and you can see down all the way into the building: 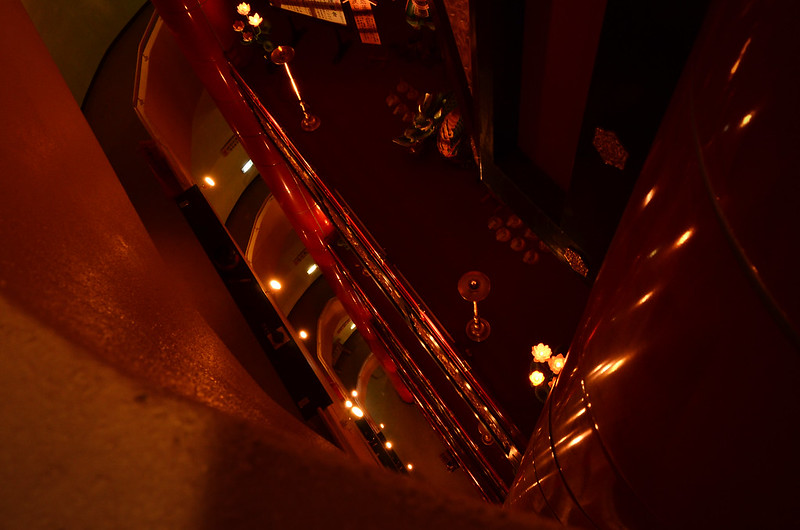 which, again, was deserted. I’m pretty sure I was the only visitor, and the slightly strange atmosphere was beginning to weird me out. I called the lift from the 16th. The lifts have some amazing decoration, by the way: 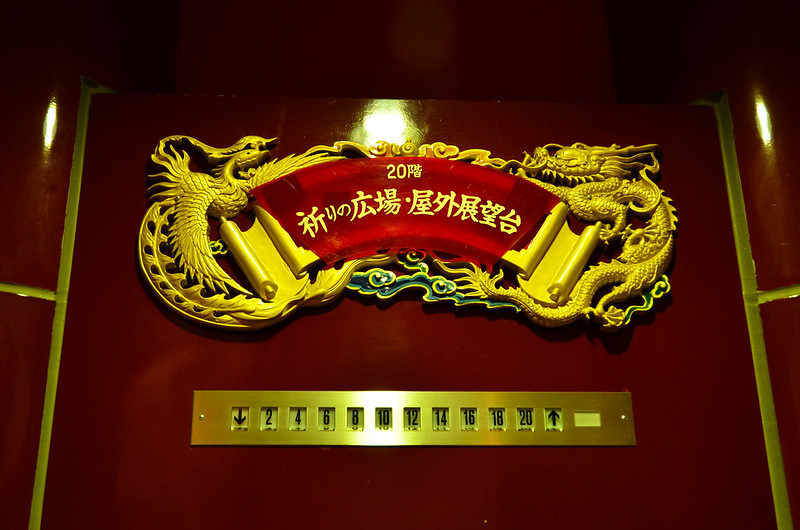 At the bottom, you emerge into a kind of exhibition hall, in which you can walk all the way around the base. Fluorescent lights flickered, the bathrooms were out of order, the carpets were worn out, and it smelled very slightly damp. It had seen better days. 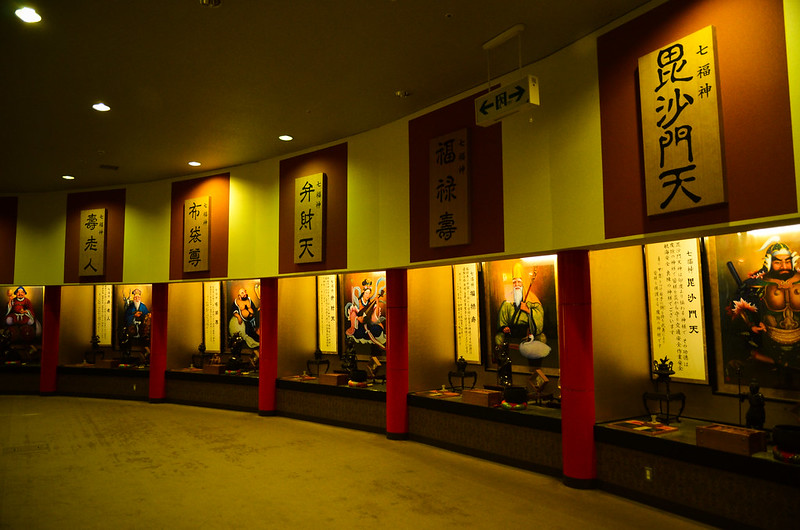 I took a quick look around, then made for the exit – I’d seen a big storm coming in and wanted to make it to the car before the rain. As I exited, the man appeared to be either sleeping or meditating, but sat upright as I appeared.

And then out into the garden, past the broken fountains, and into the car just as heavy raindrops began to hit the windscreen.

Of course, I wanted to know why this strange place exists – but despite appearing in dozens of google-bait-y “Top Ten Statues” lists, there’s precious little information in English. Here’s what I’ve been able to work out based on my flaky Japanese and a bit of Google Translate – any corrections welcome!

Ashibetsu was a prosperous town due to coal mining in the post-war period, but many mines closed in the 1960s and by the 1970s people thought that attracting tourists could be the key to future prosperity. A hotel – complete with that Nara-like pagoda, and onsen baths – was opened in 1977. Planning of the Kannon statue began in 1975, and construction took until 1989 – there are a few photos from construction here.

The hotel and Kannon area was, if I’ve made this out right, known as 北の京 芦別 – kita no miyako, Ashibetsu – or, very roughly, the capital of the north, Ashibetsu. Also constructed was a monorail – the first in Hokkaido, carrying up to 80 people in three cars from the hotel to the Kannon – it ran around the left side of the garden, if you’re looking up from the car park at the statue; the shadow of it is still visible.

The monorail stopped running in 1999, and was demolished in 2008 – there are some photos of it in various stages of newness, operation and decrepitude here, here and here – or in this video, which also shows some kind of ‘English’ show playing at the hotel. According to this excellent history, the main ticket gate of the Kannon has been abandoned since at least 2003.

Finally, in 2013, the company running the whole business collapsed. The Kannon is now owned by a ‘religious corporation’ called the Tentoku Institute; hence its new formal name: 北海道天徳大観音.

So, the giant Kannon is giant evidence of a sad story: people built it, but the tourists didn’t come. The town’s other tourist attraction – a theme park called Canadian World – didn’t fare much better; it’s now a park.

Businesses come, of course, and sometimes businesses go. But there’s something sad about the way that this one remains,  a giant white shadow, watching over the town below.

This article is a small diversion from my usual stuff on traveling Japan on a budget – there’s loads of that here, or you might like to start at nearby Furano.