Japan on a Budget: Toyako Onsen 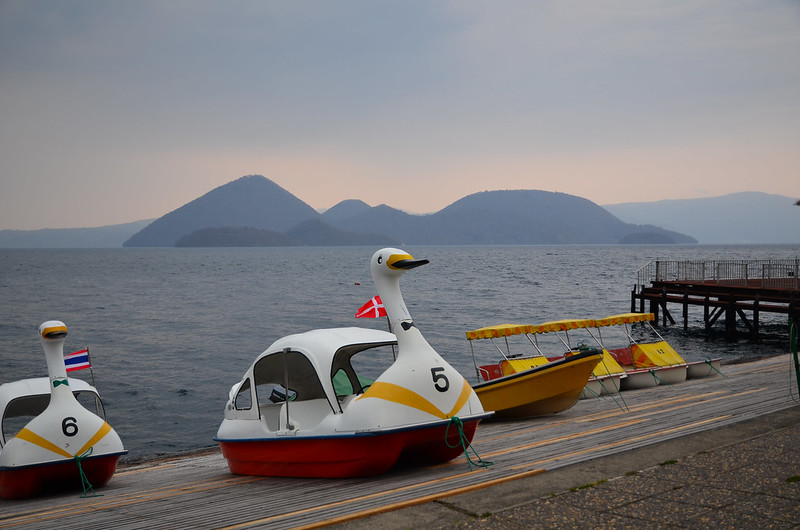 About half way between Hakodate and Sapporo you’ll find an almost circular lake with a handful of islands in the middle, and on the southern shore of that lake the resort town of Toyako Onsen. Lonely Planet describes it as “faded”, which is a pretty fair description, but if you have the time it’s worth a stop.

Tokkyu trains from Hakodate to Sapporo stop at Toya, which is about 6km south – but that’s 6km including a long, ugly road tunnel, so I was happy to find that I wouldn’t have to walk it. There’s a local Donan bus service which stops outside the station and takes a fairly circuitous route including a couple of switchbacks to wind its way to the onset town bus station – this costs less than 400yen.

The town wasn’t exactly bustling – the tourist information office was closed, as was what appeared to be a museum commemorating a G8 summit in the town (when open, I’m sure it is amazing). For traditional family fun, there are also those strange swan-shaped hire boats that you find on every lake in Japan without fail. But no matter, because the alternative way to spend some time is to climb aboard what appears to be a giant floating cake-slash-disney-castle and take a tour over to Nakajima island. 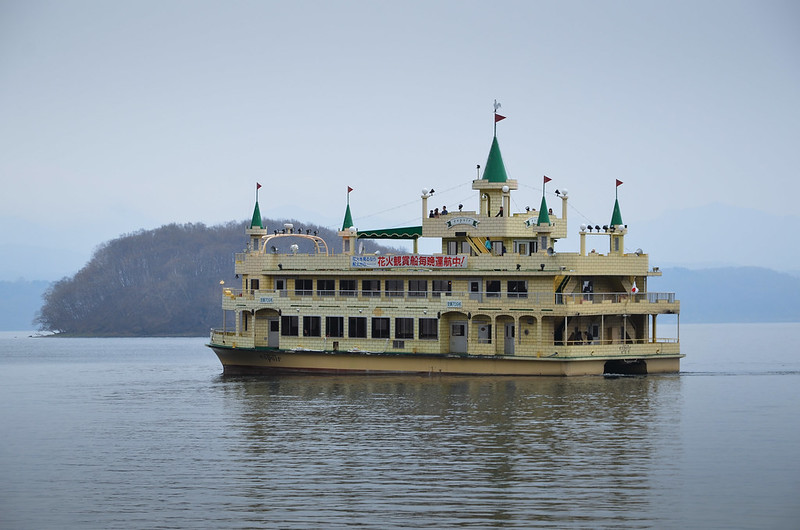 The pleasure cruisers – only one is shaped like the aforementioned cake castle monstrosity – depart every 30 minutes, and cost about 1500yen. This seems a bit steep for a 50 minute burble around the lake, but more importantly the boat stops at Nakajima so you can disembark, explore the island, then catch another boat back later.

Nakajima contains a shrine, an ice cream stand, some toilets, and a building that I think was a small museum – but more importantly, some walking trails. A short course takes you through the woods for maybe an hour at the most (probably 30mins or so if you walk quickly), or there’s the Akaezomatsu trail, which takes you a bit further (not far, though – 4 or 5km at the most). It’s an easy stroll, and well worth it for the moment you drop out of the forest into a huge, clear meadow – deserted when I passed through. 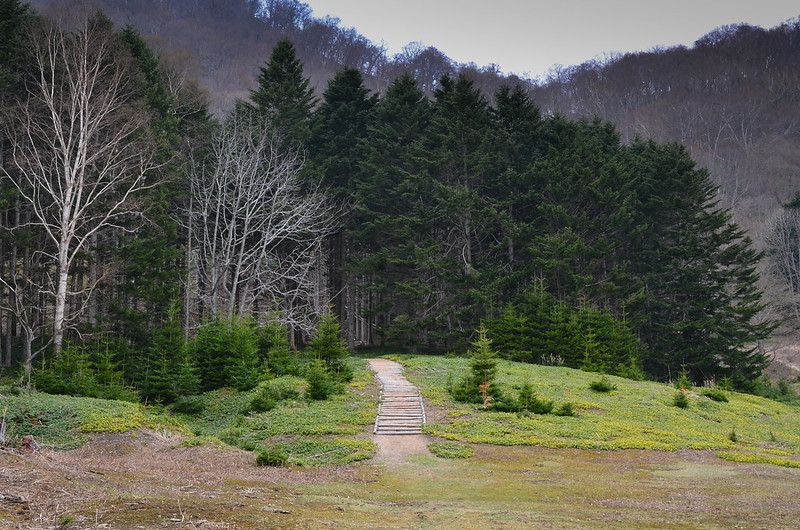 Both are not so much well marked as almost paved, so they’re an easy way to kill an hour or two. Beyond that, I noticed some more interesting trails going off into the backwoods – there’s no sign of a trail map on the island, though, or anywhere else I could find. I’d hope that in high season the tourist office could help.

Back on the mainland, it’s worth walking up behind the town, as on the west side there’s what appear, from a distance, to be some unusually isolated buildings. When you get closer, you’ll see that they sit amid a number of defences against landslips caused by the volcano behind – and that they serve as a rather poignant memorial to how much destruction was caused when it last erupted. 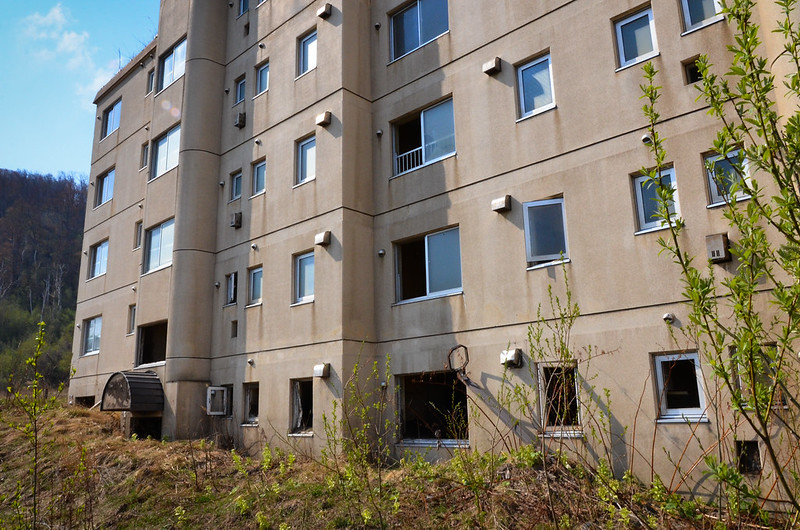 You can walk around what was once, I think, a small onsen hotel – now buried half a floor deep, and with its windows smashed in, and then a block of flats – the only one remaining of three. It’s also buried up to the second floor, and has a massive hole in one corner where a section of bridge from up the mountain smashed into it – the bridge itself rests askew between the two buildings, streetlights still attached. From behind the bridge, another hiking trail leads South. 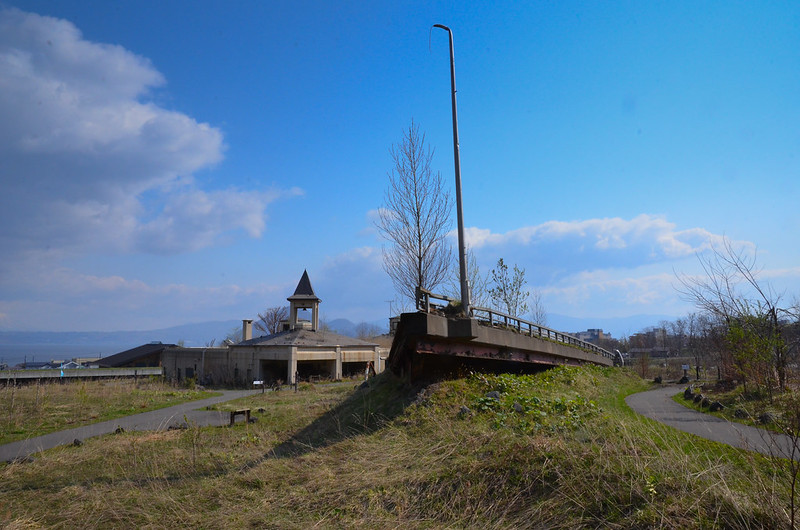 So there’s some interesting stuff to see in Toyako – maybe for a day, no more. But the reason people come is the onsen – about a dozen hotels of various degrees of poshness line the southern shore of the lake, with the apparently rather grand Windsor hotel sitting alone up on the West side – I spotted a shuttle bus at the station.

I stayed at the ‘The Lake View Nonokaze’ – a fairly new, red-brick hotel about half-way down the shore. My reasons for picking it were simple: because of poor planning, and the Golden Week holidays, it was the cheapest of three options available to me anywhere between Hakodate and Sapporo – everything else, from the capsule hotels to the ryokan, was full. And at £170 per night, it cost at least twice as much as anywhere I’ve ever stayed in Japan before. I weighed up the choice between coughing up £170 and sleeping on a bench in Hakodate station*, and chose the former. My backpack and I cut a strange figure in the lobby full of posh families.

But that said – it was lovely. For £170 I got a room big enough to call a suite (huge double bed, chaise-longue, lake view), in a wing with a ‘お一人さま’ lobby for solo visitors. And then the onsen. Set on the top floor, there are two complete onsen areas, each with indoor baths, saunas and a rooftop rotemburo – the male and female sides are swapped overnight, so visitors for one night can always check out both (the one nearest the lifts is better).

The rotemburo has a  a view across the lake and to the islands, making it a really pleasant place to while away a few hours in the rain. In addition, there’s another onsen on the second floor – this one, according to the photos in the hotel literature, is mocked up to look like your average shitamachi place, complete with the branded yellow buckets. I was tempted to check it out just to see, but the lure of the rotemburo dragged me up to the roof. Three times.

By night, the castle-cake boat is decked in lights and cruises around the lake, full to the brim with coachloads of visiting tourists, as they watch a fairly spectacular firework display launched by speedboat – quite a sight. But in the morning – after another onset, because why not – I hit the road for Sapporo. 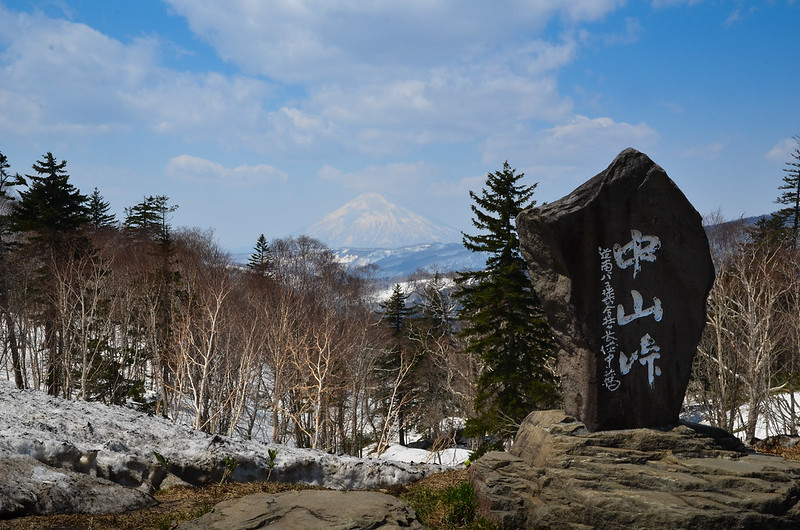 You could do this by taking the Donan bus back to the station, or walking it, then catching another Tokkyu train heading north east – but as the hotel offered a free bus service, which heads straight to Sapporo through the mountains, I took that instead – if you do travel by road, there are some great views as you wind up – even in May there was still quite a bit of snow on the ground.

* Don’t plan on sleeping on a bench at Hakodate station. It closes for a few hours overnight.