Japan on a Budget: Furano and Biei 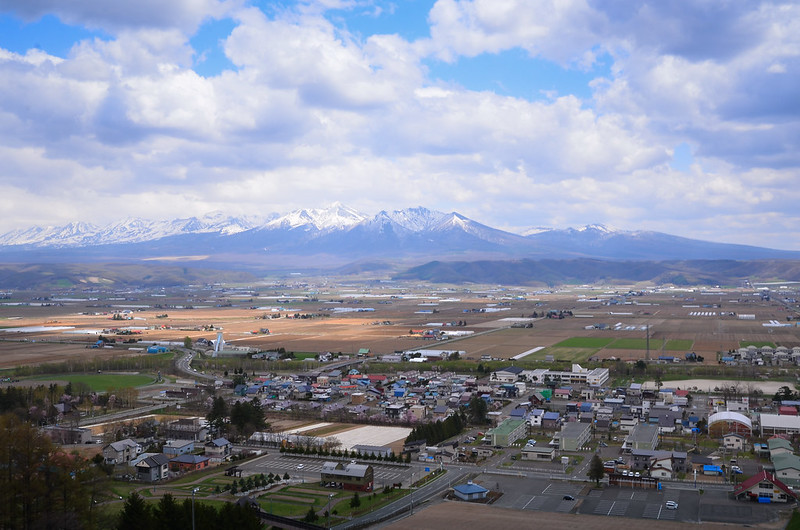 From the port of Otaru I jumped a train to Sapporo, from there took an express to Takikawa, and from there hopped a tiny, chuntering one-man train to Furano. In Furano, I rented a small car – there’s a large Toyota Rental shop right outside the station if you turn left – and drove out of the town towards Naka-Furano – all told, a bit of a trek, but worth it to see the view shown above.

Furano is found in the centre of Hokkaido, ringed by beautiful snow-capped mountains, and is a tourist spot for two reasons: in winter it’s a ski resort, and in summer people come to see the colourful fields and lavender farms. In spring, caught between those two, it’s wonderfully quiet.

A local train line cuts through the Furano area, but to see much of the place you’ll need a car, or maybe a bike (I didn’t spot any bike rental places on my out-of-season visit). Armed with a Toyota Vitz and GPS (more on renting cars in Japan here) I trundled around a few local spots. In Naka-Furano, I hiked up the lavender fields – the photo above is from the top. In high season there’s a ski lift type affair to take you up quickly, or it’s a steep 15 minute walk. 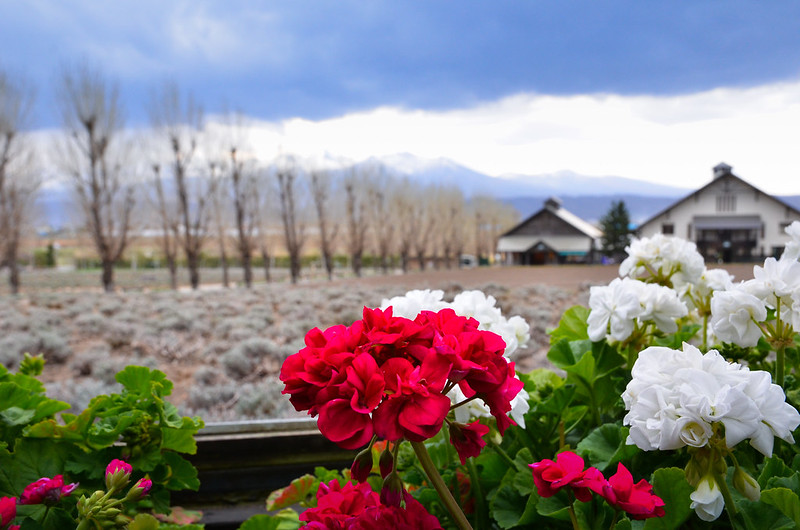 Just around the corner is Farm Tomita (above) – a kind of elaborately staged miniature farm, complete with parking for about ten million coaches and numerous souvenir shops. The centrepiece is a huge field that, in summer, will be striped with differently coloured flowers – on a rainy day in May, I took a look around the greenhouses, which are interesting but no match for the botanical garden in Sapporo.

On the other side of Furano, there’s a cheese factory that accepts visitors to cheese making courses (knowing only the words for “milk” and “cheese”, I figured I’d be out of my depth), but which has a great ice cream shop next door – try the corn flavoured ice cream. Also in the Furano area, I headed over to the Furano New Prince hotel to check out the onsen – it’s a bit expensive (1500 yen), and not particularly nice, but proved a good way to shelter from a massive rainstorm. 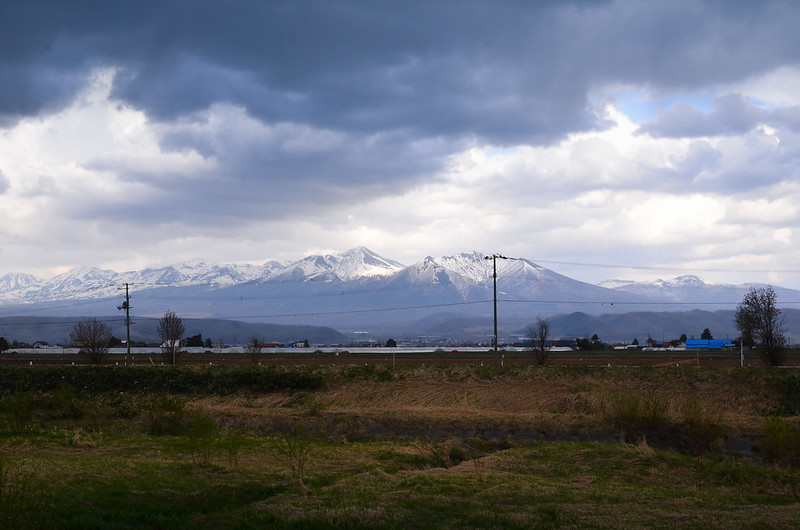 More interestingly, I took the chance to check out the Dai-Kannon at Ashibetsu.

Furano is a small town, but there are a few cafes and so on, plus a scattering of roadside places (fast food, HottoMotto, etc). Where I stayed in Naka-Furano I spotted one ramen restaurant, which was closed, and a few obviously seasonal locations not yet opened for the year. There are a few convenience stores, of course.

When it comes to staying, you could stop at the New Prince hotel, or the older Prince Hotel (they’re some way apart from one another, and both out of the town near the ski slopes). Instead, I booked a bed at the Furano Youth Hostel. 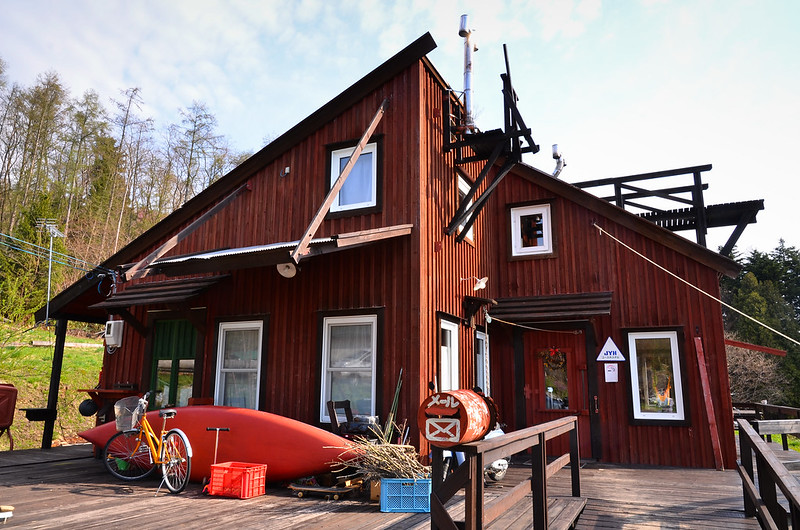 This small, friendly place is found up behind Naka-Furano station – you could walk it from there. It’s run by a couple, and has room for 15 people at the most – but when I showed up, there were just three of us. Fantastic home-cooked dinner and breakfast are included in the really very cheap rate.

It’s a striking building from the outside, but inside is amazing – as one fellow guest observed, it’s like something from a Miyazaki film. Constructed largely from chipboard and wood beams, it’s been made accessible through the use of ropes and pulleys that can open the doors, and there appears to be a hatch of sorts that you could climb out onto the roof. There’s also a large balcony, overlooking the town, at the back.

Coffee, tea and so on are available, and there’s also a beer fridge with an honesty box. I had a great evening chatting with the other two guests, then woke up to find a pot of coffee brewing up on the wood stove – perfect. You can book a place by phone, or by email, from here.

The next day I was headed to Asahikawa, so I dropped the car off near Furano station and took another local one-man train. As we passed through Biei, though, I couldn’t resist a detour, and jumped off to take a look around.

Like Furano, Biei is a beautiful countryside town, surrounded by patchwork fields. Again, it’d probably be best explored if you have a car, but I found that the convenience store across the road from the station rented bikes and were happy to look after my backpack for a couple of hours. 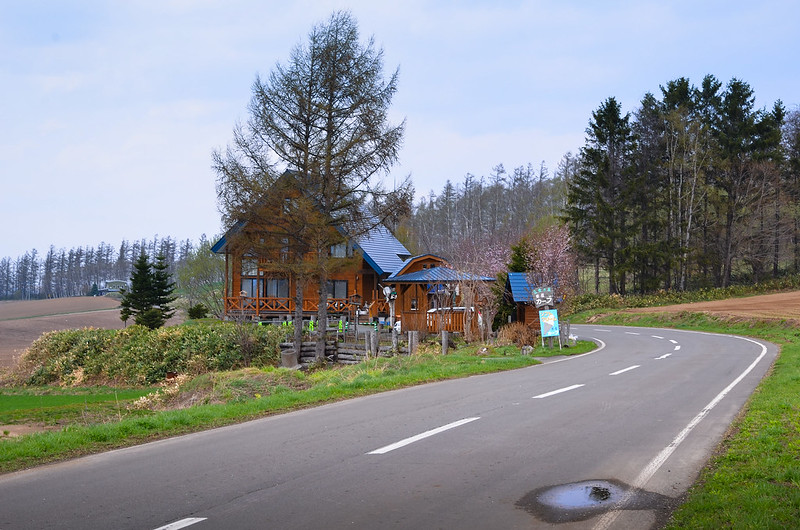 I took the bike across the river and up out of the town, into the quiet countryside – and then happened across this tiny cafe. The cafe is the small shed-like building on the right, and had room for about six of us, sitting up at a bar-like counter. Propelled by strong black coffee, I fought against the wind all the way back into town. Looping around the back of Biei, there’s a huge lumber yard – I suppose it’s the Hokkaido equivalent of Twin Peaks.

After a couple of hours, though, I had to move on – returning the bike, I resumed my train ride to Asahikawa.