Japan on a Budget: Hakodate 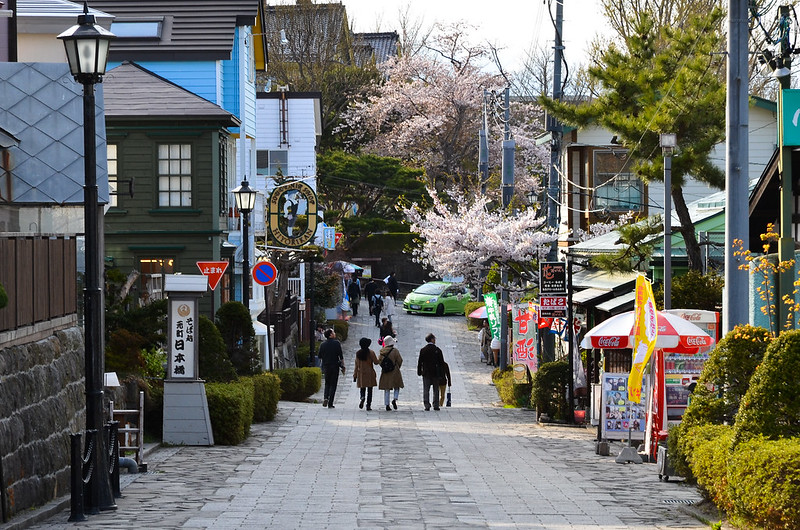 Six months after leaving Kyushu, I couldn’t resist a super-cheap flight into Haneda in early May. Having never visited Japan in springtime before, this was a chance to finally see the famous cherry blossoms – except that I would be arriving a bit late, and the only area still blooming with sakura would be the far North. So I headed to Hokkaido.

Flights to Sapporo from the UK are relatively few and expensive, so I booked the ticket to Haneda, and then a domestic ANA ticket (cheaper if you buy direct) north from there. After something like 21 hours of travel, I landed in Hakodate.

Hakodate airport isn’t huge, but it’s outside the town. Fortunately there’s a bus service: my flight from Tokyo was met by one, idling outside. It rolls into the town, via several stops, to the Ekimae (outside the train station) bus station.

To get to the interesting part of town, it’s easiest to take the tram a few stops. The line starts just at the side of the Loisir hotel in front of the station, and uses the ‘take a ticket on boarding’ system – take a ticket when you get on, and it has a number – when you get off, pay the fare for that number denoted on a board by the exit.

The biggest tourist attraction in the city has to be the view from the top of Mount Hakodate, which is easy to reach via one of Japan’s half-million cable cars. At the top there’s a surprisingly big station with two restaurants – one more formal, one where you order at the counter, and both serving the same food – and a huge gift shop. As night falls, tour group after tour group arrive, giving the feel of a station concourse – but one with a hell of a view, so it’s worth the bustle. 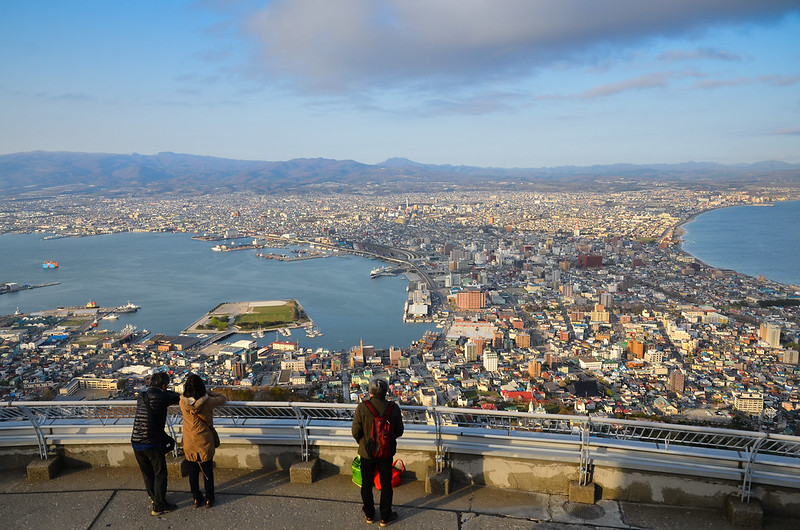 During the daytime, there are more interesting places to explore down below. From the cable car station, facing the mountain, you can turn right and wander through a beautiful area where Eastern Orthodox churches (Hokkaido’s pretty close to Russia, and Hakodate is a big port) bump up against temples, and parks blossom with cherry trees. It’s a great place for a stroll. Alternatively, the tourist signs helpfully point out the location of Japan’s first concrete telephone pole (not pictured).

Because of the insanity of Golden Week, I was only able to stop in Hakodate for 15 hours or so overnight. But there’s one attraction that’s easy to catch even if – in fact, especially if – you have an early train out: the morning market. If you’re standing outside the JR station, looking away from it, then turn 90 degees right, and look past the Loisir hotel to the left: you’ll see a low building about a block away.

This is the asa-ichi market complex. At about 7.30am it was teeming with all manner of seafood, but especially some of the largest, scariest crab I’ve ever seen, all crashing about in suitably giant tanks. There’s all manner of stuff to eat – blowtorch grilled sea urchin, freshly sliced squid – but also a whole alley devoted to seafood donburi. Choose a busy shop, grab a seat, and you can order anything you want as long as it comprises several forms of seafood on rice – I went for salmon salmon roe and crab, for about a tenner.

If you’re leaving, or entering, Hakodate by train, then there are two obvious places to stay: right outside the station you’ll find the Loisir hotel on the right, and the Route Inn Grantia (ルートイン) on the left. I stayed in the Route Inn because it was slightly cheaper.

I’ve stayed in Route Inn hotels before, and some are great – the one near Aoshima felt like a 5 star hotel with five quid prices. This one’s seen better days – my bed was as hard as a rock, and to be honest I’d consider the Loisir next time. On the plus side, it does indeed have an onsen-style bath – this is on the top floor, presumably so as to command the best possible view of the JR train station – and free coffee in reception.

I think two days would be a nice period of time to explore Hakodate properly. But with Golden Week starting in earnest, all the hotels filled up – and I had to leave town and head north-east to Toyako Onsen.